To wrap up National Historic Preservation Month, let’s talk about those wooden truss arch girders that hold up the Coliseum’s rigging structure. Bear with me, here, because there were a few hoops we had to jump through before we even got to lay hands on them!

The Coliseum, built in 1924, was constructed using an arch type truss configuration that clear spans the main ballroom dance floor area. The main arch clear spans 115’. The truss arch sections are constructed of built-up wood members consisting of 5 layers of 1-3/4” x 7-1/2” wide top and bottom chord members. The truss member chords are bolted together with ½” diameter through bolts that are tied together with a spaced web block. The truss arches are just over 37’ high at the center of the room. The picture to the right illustrates the orientation of the stage, girders, and rigging structure: 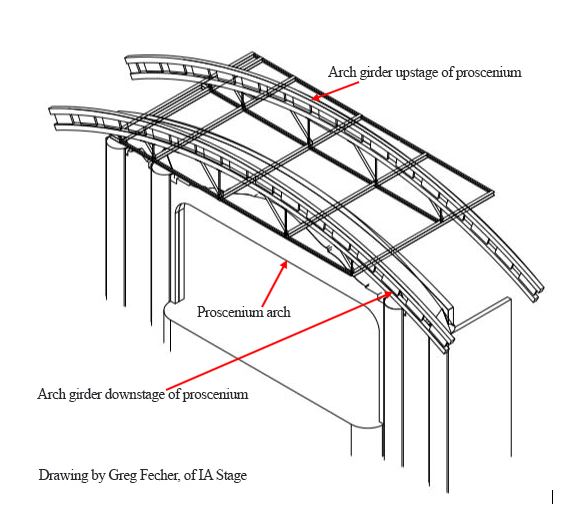 There are 11 of those wooden truss arch girders marching from the south end of the building where the Box Office is located, to the north end of the building, where the stage is. To keep us all on the same page, I started counting the girders at the south end of the room, which puts #10 just downstage of the proscenium and #11 upstage of the proscenium. #11 is directly above the stage, running SR to SL. Those two arch girders support the 43’ x 25’ steel rigging structure that was part of the Coliseum’s 2018 partial renovation. #11, the one upstage of the proscenium, had to be reinforced to accommodate the weight and use requirements of the new rigging system. The reinforcement of the girder was pretty straight forward. Accessing the girder was another story.

Over the course of a few weeks, there was an intense flurry of emails involving Shawn Briel, John Gitzy, and Jay C. Hurt from IA Stage; Jean E. Totti, Nick Mayer, Raul Quintana, and Blake Elkins with the City of St. Petersburg; Bill Weber III and Daryl Hobson of Weber & Tinnen, P.A. Structural Engineers; John Ackerman of Sunbelt Rentals; and JR Begin with Bayside Building Services. It was decided that three construction scaffolding units – one on the main floor just downstage of the proscenium arch and two onstage just upstage of the proscenium arch – would provide the overhead access needed to reinforce the girder and install the rigging structure. However, neither the dance floor nor the stage were ever intended to hold the roughly 1800 lb. load of each scaffolding unit. Bill Weber said unequivocally, “The main floor has to be shored under the scaffolding posts,” in order to safely complete the renovations.

This meant that the floor beneath the apron – the area of the stage that extends past the proscenium and into the house – had to be reinforced from the ground up. A new crawl space was cut through the front of the apron in order to place shoring jacks below. Once those were in place, the FOH scaffold was erected downstage of the proscenium arch as follows: plastic was laid down to protect the wood floor; ¾” plywood was placed on top of the plastic to serve as a walkway, a place to land tools and materials, and to help spread the weight of the scaffolding; aluminum beams­­ (running parallel to the front of the stage) were placed on top of the plywood so that there would be a beam was beneath each scaffold post, further distributing the weight load. Small wooden “landing pads” were placed at the center of each aluminum beam to be sandwiched between each post’s metal foot and corresponding aluminum beam. The picture below and to the left is what the space looked like with the scaffolding in place. 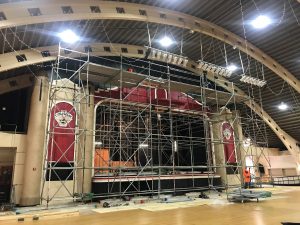 The same methods of protecting the wooden dance floor were used to protect the stage floor – plastic, plywood, aluminum beams, and “landing pad” for post feet. These measures distributed the weight of the scaffolding units so that additional shoring under the stage itself wasn’t necessary.

And now, back to girders! Beginning offstage right, nine new 3/8” diameter x 7” long galvanized lag screws were placed 12” on center over an 8’6” length above the foundation. The new lag screws, inserted through the outer plies, were staggered across the top and bottom chords for a total of 18 new lag screws.

Traveling up the arch girder, there is another section of reinforcement at approximately 50’3” from the center of the arch. 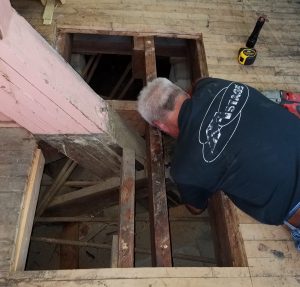 Reinforcements here consisted of nineteen new 3/8” diameter x 7” long galvanized lag screws placed 9” on center and staggered across a distance of 13’6” on the top and bottom chords for a total of thirty-eight new lag screws. (An alternate method discussed was to use 3/8” diameter by 11” long threaded rod with a 3/8” hex nut and washer at each end to through bolt all five layers of the top and bottom chords, respectively, but there wasn’t enough clearance to drill completely through the top chord and get the 11” long threaded rod in there properly.) The reinforcements were mirrored on the stage left side of girder #1, completing the structure for the new rigging system. The photo to the right shows an IA Stage crew member accessing the bottom of the stage left side of girder #11. You can see the 5 layers of 1-3/4” x 7-1/2” wide wood I was talking about earlier.

Talk about team effort! What I found really impressive about this project was the active and present communication among all parties involved. “Our entire team enjoyed working with the city and especially the caring and enthusiastic management and staff of the Coliseum,” said Mark Black of IA Stage. The finished space is stunning with fresh paint and new curtains.