I told you last week that we had a Fuzzy and a Bear on our roster. Last week we got to know Fuzzy. This week, let’s get to know Bear! 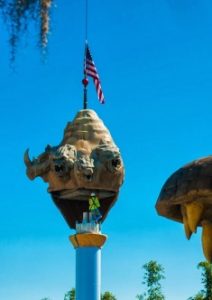 Bear Garber is known as Bear. He goes by Bear. He signs his name as Bear. “There’s no need to put that in there,” was his response when I asked his given name. It’s not that he has an issue with it; he did tell me his given name. It’s just that his mom is the only person allowed to call him by the name she gave him. Rather than confuse the issue, he wants us to stick with Bear.

I did find out that he’s been called Bear since junior high school. There was a TV show running at the time called The Hair Bear Bunch and the nickname Hair Bear came into play because our Bear had really long hair. The nickname was shortened to Bear and he’s been Bear ever since.

Bear Garber was born in California, but he grew up in Miami. His father was a 747 captain for PanAmerican Airlines and was transferred to Miami when Bear was 6 months old. When I asked him about the educational timeline that got him here, he said, “After high school, my education had nothing to with what I do now.” I don’t know about you, but that made me laugh!

He started working on Youth for Christ’s Campus Life’s haunted House in Miami when he was about 14. A few years later, he was the construction director. After high school, Garber attended the University of Florida for 2 years, then went back home to Miami to take a year off. That one year turned into 3, and so he moved to Orlando in 1987 to enroll at Valencia Community College where he got his Associate of Arts, Business. After Valencia, he went to UCF for 2 years. He was going to school during Spring and Fall semesters but working during Summers and Winters, and the school said he wasn’t allowed to do that anymore; he was expected to enroll full-time, year-round.  “At that point, I was already working for Nickelodeon, going back to Miami to do the Haunted House in the fall, and I thought, ‘Nah…I’m done.’”

Since then, Garber has worked with Mecca Productions, Inc., Scenario, Jon Richards Company, JK2 Scenic, SGA Production Services, AES, MAPP Construction, Caylex, Xperience, and Sparks in venues from Walt Disney World to the Houston Livestock Show to Colier County’s Naples Depot Museum. He shared a fun story with me about the Naples Depot Museum. The Director of the museum commented to Bear that he’d always wanted to see the museum to expand their aviation section. As part of the exhibit, the museum director wanted to see a plane coming through the wall, “…but that can’t happen,” and he dismissed the idea as a pipe dream. Bear disagreed; it could happen. He asked the museum director to give him 10 days to provide an accurate estimate. “I really enjoyed that moment, handing him that estimate,” he said. Now check out the image to the right. That is, indeed, a plane coming through a wall.  This totally illustrates how Bear likes to work: take an out of the box idea, create the  practical steps to make it happen, and then DO it.

Bear comes to us with over 40 years’ experience the commercial Entertainment/Theme Park Construction industry as a designer, fabricator, rigger, installer, superintendent, project manager, installation supervisor and director of operations. That last item there, operations, is something that he has been working towards because, as he tells it, “I really enjoy being a part of the big picture, as well as working with the people who are getting the work done. Being able to pass on the experience while figuring out a way to help and encourage in a given situation is very satisfying. I like good people and even more, I like making good people. And I like making ‘bad people’ better, if I can.”

Take a minute to talk to him when you see him. He’s a friendly guy with a lot to share. Welcome aboard, Bear!

Photo of the actual bear by Andrew Steinle from FreeImages.